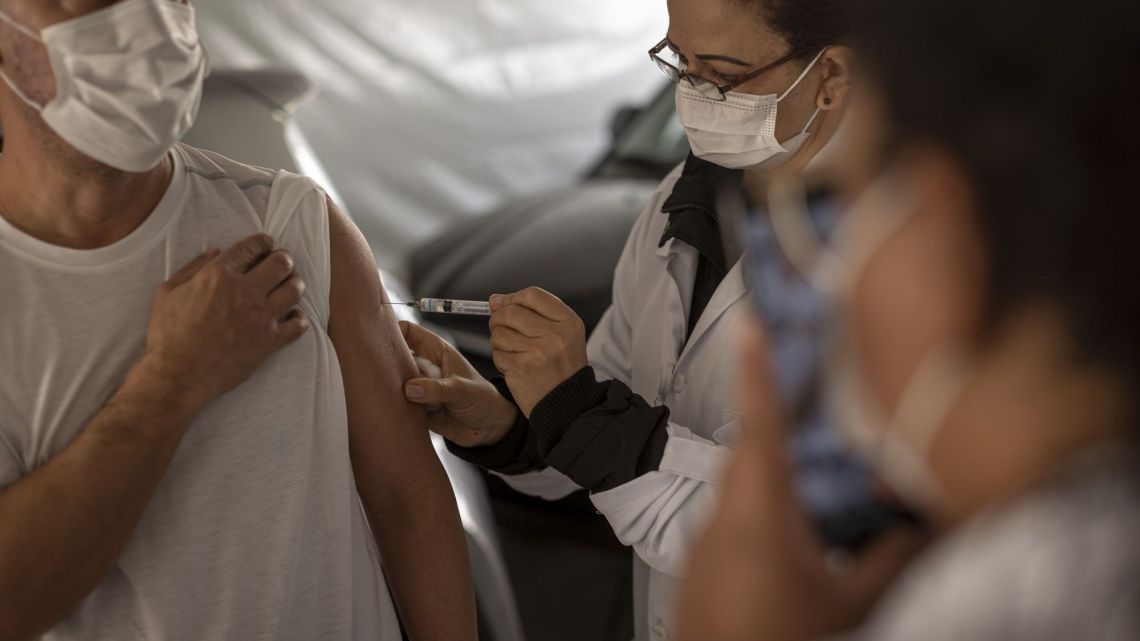 The Agency said that to date they have reported 833 cases of Guillain-Barré syndrome (SGB) in the 592 million people who received the AstraZeneca vaccine all over the world. He warned, however, that the overall risk of developing the syndrome after being vaccinated with AstraZeneca is less than 1 in 10,000.

The United Kingdom reported 393 cases in people vaccinated with AstraZeneca, but Regulatory Agency for Medicines and Health Products from the United Kingdom (MHRA) said they are not sure the condition is showing alarming numbers. And while they do not officially recognize Guillain-Barre as a side effect of the vaccine, they have clarified that they are closely monitoring the alleged link.

In the United States, the Food and Drug Administration (FDA) also warned in July of an “increased risk” of developing Guillain-Barre syndrome with the vaccine. Johnson & Johnson. In Brazil, the Brazilian National Health Surveillance Agency (Anvisa) a warning was issued following the appearance of 34 suspected cases of GBS in people who had been vaccinated against coronavirus.

The syndrome is named for French neurologists Georges Guillain and Jean Alexandre Barré, the first to describe the disease, along with André Strohl, in 1916.

The Astrazeneca antibody can prevent covid-19 in high-risk groups

It is a very rare condition that can be caused by viral and viral infections It is thought to be activated when the immune system fails and begins to attack the body’s own nerve cells.

Symptoms of the condition include numbness, tingling, muscle weakness, and balance and coordination problems. These symptoms tend to start in the hands and feet before spreading to the arms and legs.

A second dose of AstraZeneca does not increase the risk of thrombosis.

Experts say symptoms worsen in the first few days before they start to improve. Many people with the syndrome fully recover, but one in five is left with long-term problems and one in 20 dies.

Guillain-Barré syndrome treatments include painkillers and blood transfusions to help manage the condition.

As a consequence, about 7.5% of people develop the disease, worldwide.

“The main risk generated by the syndrome is when the respiratory muscles are affected. In the latter case, GBS can cause death if proper measures are not taken.” Anvisa warned BBC News Brazil.

“They should also be alert for problems with coordination and instability, difficulty walking, tingling in the hands and feet, weakness in the extremities, chest or face, and problems with bladder and bladder control. bowel function. ” She added to the agency.

“The benefits of vaccination continue to outweigh the risks”

The EMA and the MHRA emphasized that the benefits of vaccination against Covid-19 outweigh the risks of possible side effects.

However, the European agency “considered at least a reasonable possibilityThat the AstraZeneca vaccine can “Trigger syndrome in ‘very rare’ cases”. “Therefore, Guillain-Barré syndrome should be added to the product information as a side effect of Vaxzevria. [AstraZeneca]”, he said.

In a publication, the EMA explained that the frequency category assigned to the syndrome is “Very rare” (ie, occurs in less than 1 in 10,000 people), which is the lowest frequency category foreseen in the EU product information “.

Guillain-Barré syndrome (GBS) is a rare autoimmune neurological disorder (with one or two cases per 100,000 people, per year) in which the immune system damages nerve cells.

“Everyone who experiences it weakness of the part and paralysis, possibly spreading to the chest and face, within four to six weeks after vaccination you should seek urgent medical attentionRaine said, but clarified: “The benefits of vaccination continue to outweigh the risks for many people. “

In that sense, the teacher Ian Douglas, Pharmacoepidemiologist at the London School of Hygiene and Tropical Medicine, reminded the population that the benefits of the vaccine are far greater than the risks: “Overall, I don’t believe this news changes the risk-benefit profile of the vaccine.”