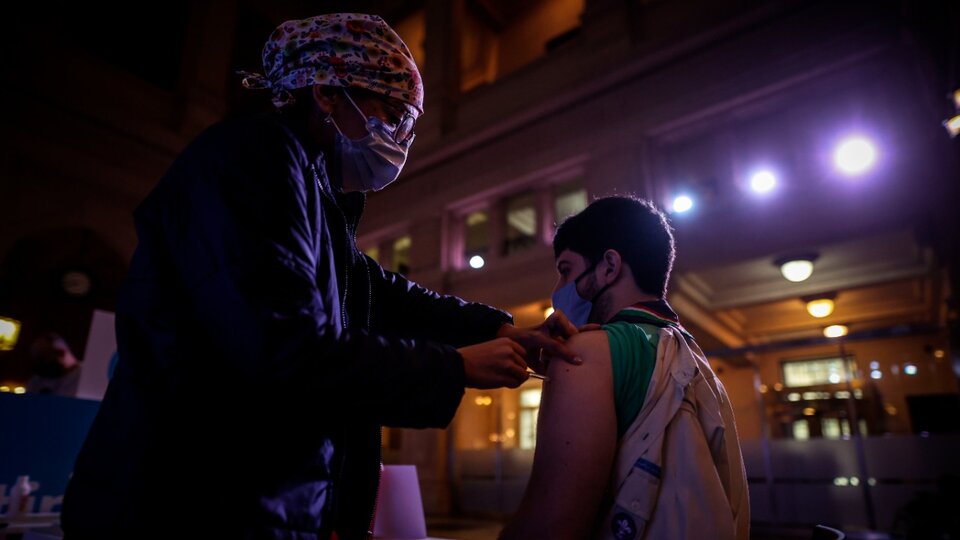 Argentina enters the last 12 days of the month with the almost assured objective that all people over the age of 18 who have registered or wish to be vaccinated will be vaccinated, at least with a single dose. The stock of doses is huge – more than ten million vaccines arrived in the first fortnight – and The province of Buenos Aires is already quoting a large number of 18-year-olds, in order to arrive in time before July 31 for the vaccination of all the elderly. In CABA they say they are applying a lot of secondary doses and so the process is slightly more delayed. In principle it is almost certain that they will open the group of 18 to 24 years before next weekend and everything indicates that they will complete the vaccination of the elderly also on July 31st. The Ministry of Health of the Nation, headed by Carla Vizzotti, awaits this week the authorization in the United States of the application of Moderna for adolescents. The next step will be the approval of the Anmat and the vaccine will then be released 12 to 17 years either before the end of the month or in early August.

The vaccination rate has become dizzying and in almost all districts the goal of vaccinating everyone of legal age before 31 will be achieved.

The Buenos Aires ministry headed by Daniel Gollán and Nicolás Kreplak has about 160,000 people vaccinated every day. It is one percent of the daily population, the highest rate reached by the United States, for example, when vaccinating more people. As is well known, the district of Buenos Aires has already completed vaccination in 70 municipalities, so in order not to reduce the number of vaccinations, it must focus on the large municipalities of Greater Buenos Aires and also on that. being done: vaccinations without shifts. It is said that this week, Governor Axel Kicillof announces a free vaccine for those over 30 and free vaccination for all ages is on the horizon.

In CABA they threaten to delay the vaccination of young people between 18 and 24 with the argument that they are applying many other doses. However, It is almost certain that the ministry in charge of Fernán Quirós will open registration for porteños from 18 to 24 on Friday 23 or, at the latest, Monday 26.

As is known, there is a delay in the production of component 2 of Sputnik V, which means that the second dose of those who received the first one is only completed by 3 April. At the end of this week, the Province of Buenos Aires sent 260,000 citations for Tuesday and Wednesday to apply 2 doses of Sputnik V to those who received the first dose by approximately 3 p.m. April.

The district of Buenos Aires is complying with the application of dose 2 of Oxford / AstraZeneca eight weeks after receiving component 1 and in the case of Sinopharm the period is shorter: 21 days. In CABA the pace is similar. Sputnik 2 has already been applied to those who received the first dose before 3 April. In the case of Sinopharm, the appointment is 21 days after the initial dose and for Oxford / AstraZeneca in 56 days.

There are a few days of difference between districts because there are enough vaccines, except for dose 2 of Sputnik V. As is well known, there is backlog in Russian production, so we have to wait for a new aircraft to come – there is a promise from The Gamaleya Institute and the Russian Direct Investment Fund to close the gap this month – or to authorize 1,050,000 finished doses from the Richmond Laboratory. This happens before the end of July or the beginning of August. For the time being, there is a deficit of around 700,000 doses 2 according to Martín Barrionuevo’s calculation, so it will be covered by a new shipment and those ready in Argentina.

As is well known, 3,500,000 doses of the North American vaccine arrived from the Modern laboratory on Friday evening. Authorization from the U.S. FDA, the northern country’s regulatory authority, is imminent so it can be applied to teens between the ages of 12 and 17. In the Ministry headed by Vizzotti, he thinks that once he is authorized in the United States, the same will be done in Argentina, almost at the same time.

From that moment on, it begins to be applied, starting with adolescents with previous illnesses.

The age range of 12 to 17 is very important because boys are infected, contrary to what has always kept the denials and speakers of Together for Change, and they also have a lot of circulation. It is very possible that vaccination will start before the end of the month and be one of the big goals of August.

Argentina has a huge percentage of registered, much more than in many countries. However, the fifteen percent who are keen include some two million citizens, a significant number of Argentines with the likelihood of being caught and spread. In the province of Buenos Aires, during the week beginning Vaccination will not only continue at train stations, but there will be teams visiting rural areas and vaccination will be established in the Central Market. An operation is being prepared, house to house, similar to those they did so all people had ID.

In the district of Buenos Aires and also in CABA, a secret seems to be in free vaccination, without shifts. This allows people who do not have a computer or smart phone to approach and who also feel that the vaccine is not complicated, located nearby. As Minister Gollán has been advancing, the idea is to multiply mobile vaccinations, in the vicinity, and home-to-home teams. About 10,000 spontaneous are being vaccinated daily in the province of Buenos Aires.

The supply of vaccines is no longer at the center of the scene. In the first 16 days of the month, 10,500,000 doses have been received and in the week beginning, more Aerolineas Argentinas flights will land and bring in another 3,400,000 doses of Sinopharm.

To this must be added at least two million Oxford / AstraZeneca vaccines, the active substance of which was manufactured in Garin’s mAbxience laboratory and is being prepared in Albuquerque. In total, the contract sets 22 million doses and so far only eight million have been received. In July there was one shipment of 733,000, when the promised one was about three million. Maybe they arrive in the second half of the month.

More Aerolineas Argentinas flights will also have to depart and return to Moscow, which has promised to regularize shipments and increase them. In this case, a major obstacle has arisen: contagions have risen sharply in Russia and the Vladimir Putin government is making a dent in the vaccination of Russian citizens.

The contract for 5.4 million doses of the Canadian-Chinese Cansino vaccine is still pending. Shipment authorization is being managed in Beijing ministries. There are talking versions that may start coming before the end of the month and others say that in the first days of August only.

And finally, the approval process for Sputnik Vs completed at Richmond Laboratory is almost certain to be completed. 1,300,000 dose 1 and 1,050,000 dose 2 are already available.

Contracts with Pfizer and Johnson & Johnson will be signed in the coming days, but in principle vaccines from the two North American laboratories will arrive in 2022.

Vaccines that are already available and those that are to arrive in the coming days guarantee flow and rhythm. Everything suggests that by July 31, at least one dose will be vaccinated, almost anyone 18 years of age and starting with adolescents. It will be by August to complete the vaccination with the second dose, aim for more than possible.