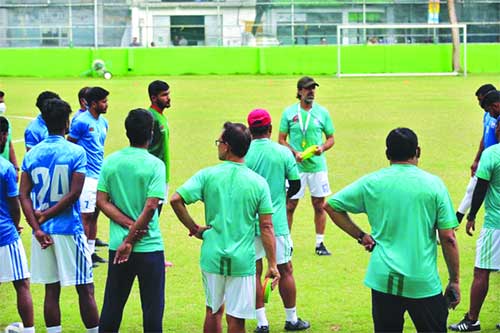 In international football, Bangladesh has a heavy match against Nepal. Bangladesh played 24 international matches against Nepal from 1993 to March this year. Of which Jamal’s rate is 8 against 12 wins. The remaining four games are a draw. Bangladesh played its first international game against Nepal in 1973. Bangladesh beat Nepal 1-0 in that Merdeka Cup match. The following year, the red-green team won the South Asian Games 5-0. However, the Nepalese host won the gold by beating Bangladesh 4-2 in the final of the event. Then Bangladesh lost to Nepal at the 1986 Asian Games. Despite losing at the SA Games the following year, Nepal could not beat Bangladesh in the next 14 years. The red-green representatives won all 6 matches played at this time. After this Nepal came in front of Bangladesh from the wall of Everest. Bangladesh were eliminated from the league after losing to Nepal in 2011, 2013 and most recently in 2016. In the first Delhi SAF match of 2011 against Pakistan, when victory in the second match was highly desirable, Nepal seemed indomitable. After a goalless draw in the 90th minute, Bangladesh completed Sagar Thapar’s free-kick in the final minute of the extra five minutes. The next match, the first match of the Kathmandu Safe Group 2013, was against host Nepal. Bangladesh beat Nepal 2-0 at Dasharath Stadium. After starting at such a rate, there was no turning back. In 2015, Kerala Safe, however, did not meet this well-known opponent. However, the last time Nepal appeared in the home field in 2017 was with sadness. Bangladesh, who lost to Bhutan and Pakistan in two consecutive matches, needed just one point in the last match, which would lead them to the semi-finals. But goalkeeper Sohail scored such a ridiculous goal that Bangladesh fell out of the match. Jamal has lost against the country in all recent meetings. Bangladesh took part in a three-nation invitation tournament in Nepal in March this year. In this three-nation tournament, Bangladesh took a chance in the final by winning against Bhutan and drawing 0-0 with host Nepal. In that final, Bangladesh lost the title 2-1 in an additional test from Jamie Day. Even today, Nepal is an obstacle in the fight to reach the final of the SAF Championship. Will Bangladesh be able to overcome this hurdle and secure a final SAF after 16 years?
Head to head
Country winning draw rate
Bangladesh 12 4 6
Nepal: 4 12