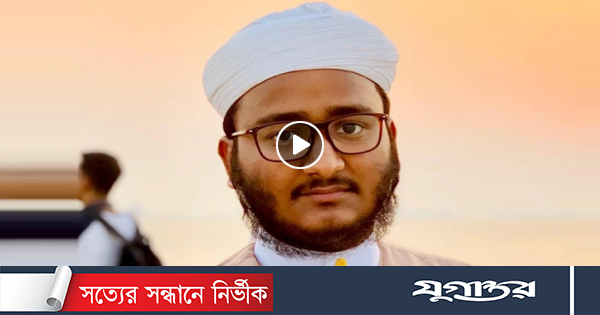 Mahfuzul Alam, a young musician from the popular Islamic group Kalrab, died prematurely at the age of 23.

He was last breathed at the Bangla Hospital of the United States in the Barpa area of ​​Narayanganj on his way to Dhaka from Narsingdi for treatment at 8am on Tuesday.

His fans still can’t believe his favorite artist left so.

The artist who posted his song on YouTube just 10 days before his death is dead today – no one can think of that.

More surprising is the fact that 19 days before his death, Mahfuzul released an inspirational song on his YouTube channel on July 1st.

And everyone would be really surprised to hear the lyrics of that song. The song focuses on the subject of sudden death.

The song says that after the death of a person, his relatives should not be broken.

Anyone who hears this song is amazed and says, did he know that he would suddenly leave the world of Maya? That’s why he kept his friends and relatives informed about the song!

Mahfuzul Alam himself wrote in the description of the song, not to go back to the country.

He writes – The song is centered on the loss of people very close to us. We will all be lost one day, no one is eternal in the world.

‘You don’t wake up like that / No one stays with you forever / If you cry like that, his sleep breaks’.

The lyrics in the song touched the hearts of the fans. This is a coincidence or Mahfuz Alam refused to cry without getting up!

The song written by Rakib Hasan was first sung by Pritam Hasan. Mahfuzul later uploaded the new song on his YouTube channel 19 days ago.

Listen to the song –

Mahfuzul Alam was a hardworking and very popular artist in the world of Islamic music in Bangladesh. At the same time he was a sound designer, lyricist and artist. He sang and designed many melodic songs of Islamic music.

The young artist composed more than 400 songs on the most popular Islamic music station in Bangladesh, Hollywood. He also sang more than two hundred songs himself. Mahfuzul Alam’s music was always appreciated by the listeners.

The people concerned think that his death caused irreparable damage to the world of Islamic music. Fans of the Islamic music world have mourned his death at such a young age.

Appearance of a girlfriend in a drug case at 12:00 – Bangla Tribune

Started the sale of the cheapest smartphone in the country, learn more features including the price of Jio Phone Next