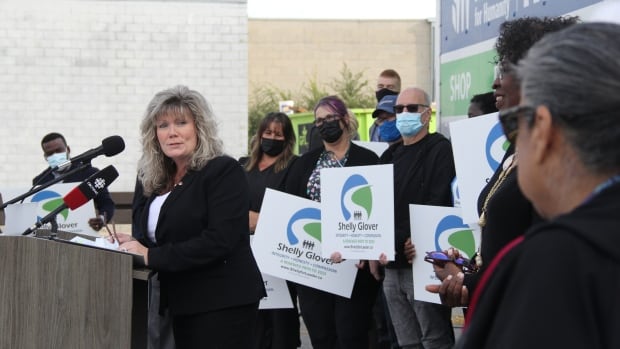 Manitoba’s head of Habitat for Humanity says allowing a Tory leadership candidate to launch her campaign on charity property marked a “serious error in judgment.”

The apology from Chief Executive Sandy Hopkins came a day after Shelly Glover officially threw her hat into the circle to lead Manitoba’s Progressive Conservative Party and become the province’s next prime minister.

Glover, a former federal cabinet minister and retired police officer in Winnipeg, announced it at an event Friday in the parking lot of the charity ReStore on Archibald Street.

Hopkins said in a statement allowing that news conference to take place “it was a serious error of judgment on my part, and for that, I apologize sincerely and deeply.”

He said Glover’s campaign representatives approached his organization last Wednesday and asked for permission to keep launching its campaign there.

“My initial thought was to say no, and looking back, that’s what I had to do. I’m very sorry I let this event proceed,” Hopkins said.

He added that it was not his intention to imply approvals for Glover’s management offer from him or the charity.

CBC News approached Glover’s campaign office for comments on Sunday morning, but did not receive a response immediately.

Below rules established by the Revenue Agency of Canada, registered charities are not allowed to participate in partisan political activity “involving direct or indirect support of, or opposition to, any political party or candidate for public office.”

Habitat for Humanity builds homes for low-income families using mortgages with no down payments or interest.

Glover used Friday’s event to select a side in the debate over the needs of the COVID-19 vaccine, saying she opposed mandatory vaccination for workers.

Her position contrasts with those of public health officials and her two opponents in the leadership race: MLAs Heather Stefanson and Shannon Martin.

That race started after former Premier Brian Pallister announced last month he would leave before the end of his term.

The feast will choose its new leader on 30 October.