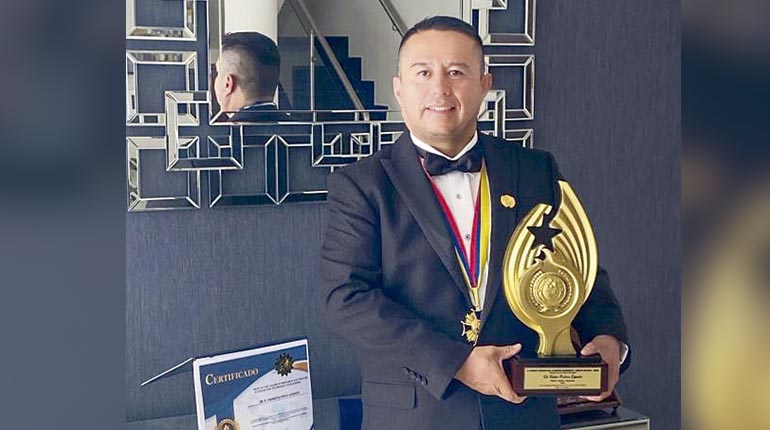 For his excellent research work in regenerative medicine, in addition to his excellent professional experience as a specialist in the field of sports, Fabián Pacheco Lafuente has been recognized by the International Society.

Research, Health, Business Development and Technology (Siisdet) as a “leader in health research and sciences for the benefit of humanity 2019-2021” and was awarded the trophy and the Medal of the Cross in framework of the Health Sciences Awards.

The awards ceremony took place as part of the VI International Congress of Regenerative Medicine and Applied Sciences, which took place practically last June, from Colombia, with the participation of more than 50 countries. .

Pacheco presented his work based on a protocol of tears and muscle treatments, of which 600 athletes were part. The work was reviewed by the Siisdet Evaluation Committee, which is composed of renowned physicians from Mexico, Spain, the United States, Colombia, Peru, Paraguay, Costa Rica, among others, who decided to give the prize to the Bolivian professional.

“Professional football players have passed, as well as amateur athletes from different disciplines. (In the investigation) there are players from the national team, from Wilstermann, Aurora and athletes from other disciplines such as tennis and basketball, all with muscle tears. We apply ozonated plasma therapy at certain concentrations and at a certain centrifugation time, where we remove extremely high platelet concentrates at a kind of revolution every minute, ”explains Pacheco,“ it seems so simple, however. , it is not because this treatment is carried out under strict biosecurity measures “, he emphasizes.

It is a work that has been developed over many years. “It’s a treatment protocol, where we learned how to treat muscle tears precisely with elements of the same person that heals internal wounds.

Many doctors, especially traumatologists, have remained impressed with the specific protocol they will implement now, “he said.

It is not the first recognition the doctor receives. In Lima, Peru, its Biozono center was listed as one of the leading young companies in the field of research and treatment in Latin America, it also received the award for Medical Excellence given by the Institute of Latin American Quality. And in Canada he was awarded for his work in the field of sports medicine.

For Pacheco, these recognitions are the result of the work he, along with his team, has been doing every day. Trained in several countries, he is a benchmark throughout the country, his knowledge has allowed him to be a doctor for the Bolivian football team and he found Biozono, the center that receives hundreds of patients, who also come from intern.

“We have been working for quite some time, not only here in Bolivia, but in Canada, where we really like to do research. Day by day, we do treatments, study reactions and make reductions and so we can also continue to improve. This we learned from college. From the second and third year of Medicine, I really enjoyed doing research and that is why we also won a national award at a student science congress, where we presented a work with a colleague who was later to be my wife. We got second place, they gave us tickets, a lot of books and from that moment on, I really liked the research, ”he says.

However, awards and prizes in medicine are given precisely to these scientific works and Pacheco is going for more. “The value I give it is a very important value because it means sacrificing my work and what we do every day and I always put them in front of me to see them and even overcome them. And this is how we also contribute to our community, we contribute to the development of the world, we are trying to improve as human beings every day ”.

“More than anything else, it’s an emotional value, they are very satisfied with what I have chosen as a professional career. I am completely happy to have chosen a career in Medicine ”, she expresses her gratitude for the guidance of her father, who is also a doctor. He states that at the time he did not know what he would study, his dream was to be a football player, but he ended up being their doctor. “Parental guidance is very important and to this day I thank him, because he knew how to get out of my way and in the end I was able to study thanks to his help, because the study of Medicine takes a lot of time, it is very difficult and sacrificial , but it also has your rewards ”.

Currently, Pacheco is implementing stem cell treatment from fatty or fatty tissue. “It’s the medicine of the future,” he says, but unfortunately the country is lagging behind in this area. “We are about 10 years behind in terms of technology and innovation. Because of that, I don’t know, it could be a lack of interest from colleagues, it could be a lack of support from government bodies. ” He also referred to the obstacles that arise, on the part of Customs, when they want to bring equipment to Bolivia. “This forces professionals to stay in their comfort zone, they do not want to have problems and not only the equipment, but also the reagents. Everything that is needed as an accessory to work in a laboratory or develop certain types of technologies “.

Pacheco is licensed to practice his profession in Canada, but has decided to place a bet on his country and his people. “I am very proud to be here and contribute with what I have learned,” he said.

He has more than 10 years of experience, studied General Medicine at the Universidad Mayor de San Simón (UMSS) and has specialties in Sports Medicine, Sports Traumatology, Rich Plasma Specialist in -Platelets,

He founded the Biozono Sports Clinic, where he treats regenerative medicine, ozone therapy and stem cells.