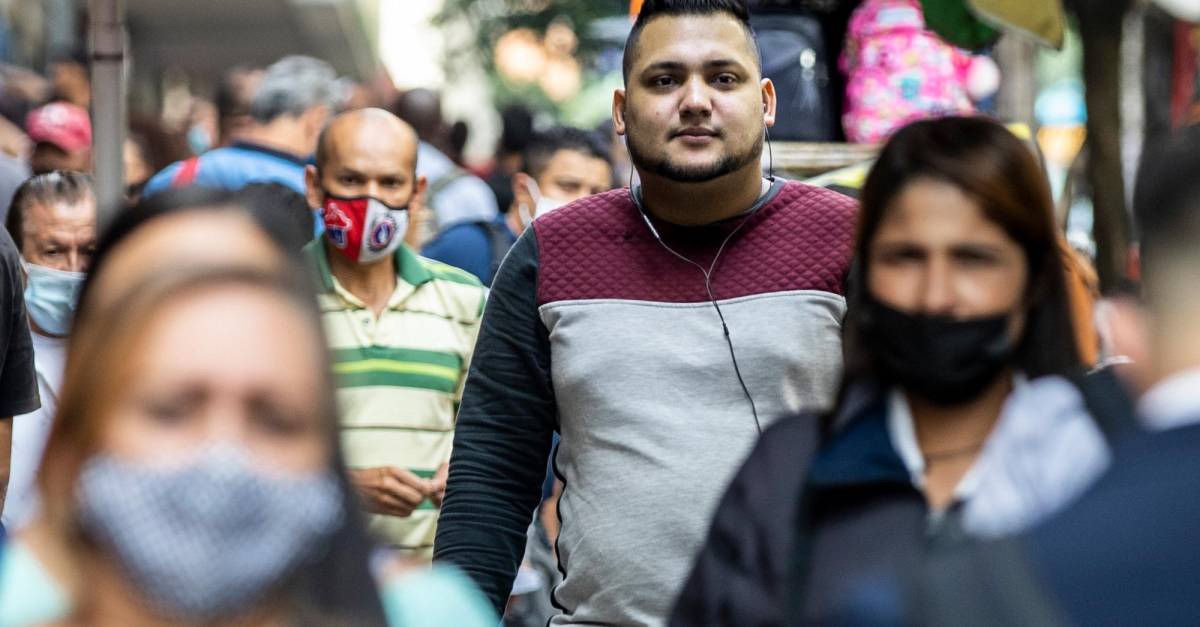 Different countries have done this, but failed. It implies responsibility and being in a moment of greater pandemic control.

For several months, the pandemic figures have been favorable in the country compared to what was experienced during the last peak of infections in June. During that month, according to data from the National Institutes of Health (INS), more than 30,000 new daily cases of covid-19 were reported. Now, as of mid-September, this figure has not exceeded 1,800 a day. In addition, vaccination is maintained a priority, forcing many to question whether the use of a mask is mandatory in open spaces.

The scene is repeated in cafes, restaurants, shopping malls, parks and even in football stadiums, where thousands don’t wear masks or put it under their noses, so it’s time to rethink this. a biosecurity measure that we have accompanied for more than a year. and a half.

The National Association of Financial Institutions (Anif) recommended to the Government, at the end of last week, to make some of the restrictive measures more flexible: it suggested expanding capacity (which for the time being does not exceed 75% in cities such as Bogotá and Medellín), in addition to eliminating the mandatory use of outdoor face masks.

So far in 2021, and under similar scenarios, different countries around the world have removed the mandatory nature of the mask in open spaces. However, after a few weeks, they changed the permit and recommended the measure.

The experience of others

Israel, the United States, Spain, and the United Kingdom were some of the countries that made this decision (see boxes), especially because of good vaccination rates and in favor of a pandemic reduction. , that is, to return to normal. “It was also about countries where the circulation of the virus tended to be low,” he says. Maria Fernanda Gutierrez, a virologist from the Pontificia Universidad Javeriana.

Israel was the first to make the measure more flexible (in April) in open spaces, when it had more than 50% of its population vaccinated (as of October 9, Colombia had 52.8% of -total projected). However, two months after and before the subsequent increase in infections by the Delta variant, his government recommended that the use of the mask be re-established in open spaces and compulsorily in enclosed public spaces.

“We have empirical evidence that they will eventually return to using the mask. In the countries where it was left, even with the recommendation to be only in open spaces, it didn’t work, ”he says. Yessica Giraldo Castrillo, epidemiologist at CES.

Regarding the transmission of Sars-Cov-2, aerosols (saliva particles or respiratory fluid, less than 100 microns in size, emitted when speaking, breathing or singing) are known to pose a risk. significant. “We know that risk can be reduced as much as possible through objects, but air transmission is much more complex,” Giraldo points out.

They have always been there: microorganisms such as viruses and bacteria exist, even in the air! With humans.

That is one of the means by which you can infect and develop a disease. Water, food and animals are also means. However, Sars-Cov-2 aerosols are relevant in the context of a pandemic, as they can remain suspended in the air, with infectious particles, for seconds to hours, and travel long distances (the smallest) to infect when inhaled.

According to studies conducted by researchers such as Jose-Luis Jimenez, a professor in the Department of Chemistry at the University of Colorado, USA, outdoor spaces are much safer than indoor ones, which doesn’t mean the outside is 100% reliable.

Therefore, there are higher and lower risk situations in open spaces. What Jiménez recommends is to keep in mind the analogy of cigarette smoke. When someone smokes near you, there is usually a light, dense smoke in the air that you can see and smell, which does not fall to the ground quickly and then mix with currents. Aerosols behave similarly.

That’s why Jiménez raises it as a key. Finally imagine that the people you pass or share space with are smoking, hurt a lot of smoke or not? If so, there may be an increased risk of infection.

That way, if you’re walking down the street alone, without sharing your closeness with others, the mask isn’t essential, but if you’re in a crowd or talking closely with friends, even if they’re outside. , it is important to use it. Think of cigarette smoke.

On the other hand, the teacher continues, if you are (you or those around you) a person with immunodeficiency or more vulnerability to the virus (due to age or comorbidity), the use of a mask is essential, both as a barrier to entry as an aerosol outlet.

At this point, Gutiérrez and Giraldo agree that although with the combination of other factors such as the complete vaccination scheme and the maintenance of the physical distance, the size of the mask may be loose outside, the disadvantage is that, “When the use of the mask in open spaces is relaxed, people relax in other places, even closed and even with other measures,” says epidemiologist Giraldo, to whom Gutiérrez adds: “That what tends to happen is that we got out without a mask and then went on the subway or bus without putting it back on. This is important. You have to be very careful. “

From pandemic to endemic

According to the Ministry of Health and Social Protection, in the future it is expected that, as in the case of other respiratory viruses (such as influenza), Sars-Cov-2 will start to have low-impact endemic behavior.

“This means that transmission figures are considered controllable: the number of cases is low, most of them mild, and for those who are serious, the health system is able to respond to and treat them,” explains Giraldo.

This is already happening in the country with other diseases such as dengue, malaria and the flu which, Gutiérrez added, are sometimes seen as an epidemic (which considerably increases the number of cases) due to factors such as the growing season. rain and favoring transmission chains.

Regarding the criteria for determining that the virus is having low-impact endemic behavior, MinSalud, through its director of Epidemiology, Julian FernandezHe stated in an official statement that “the big challenge we have is to discuss what is an acceptable level. The appearance of new variants means that, even with high vaccination coverage, the thought of zero covid is technically (if not impossible) very difficult, at least in the short and medium term. “

In the same vein, Giraldo adds that it is important to keep in mind that endemicity is not a stand-alone state, depending on the country or department, “in fact, the WHO reiterated that in order to become endemic in March next year, it will be necessary to ensure that at least 40% of the world’s population is vaccinated. It must be a global effort. “

For her part, virologist Gutiérrez argues that in the current context, the proposal to leave the mask in open places does not respond to a public health measure, “is not preventive, in that sense it is likely “It would be more accurate to consider the decision when the virus is established as endemic. For the time being, we are not sure whether we will have a fourth peak or not.”