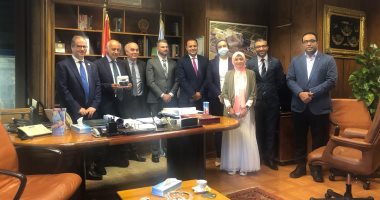 Dr. Helmy El-Ghawaby said a cooperation protocol will be signed with the American Heart Association to provide and facilitate the presence of new technology and modern devices for the treatment of heart attacks, noting that a medical committee has been appointed. formed by Dr. Set the steps by which new equipment is provided at airports, hospitals, major football stadiums and hospitals.

He continued: The Nile Valley project on the new device that helps save cases of a sudden heart attack was a dream, and it became a reality, and is a magical solution that contributes to saving the lives of many people.

This took place during a symposium held by Wadi El-Nile Hospital on sudden cardiac arrest, in the presence of Dr Ashraf Hatem, former Minister of Health and Population, Sohair Abdel Hamid, a member of the House of Representatives. Deputies and head of the former Health Insurance Authority, and Dr. Awad Taj El-Din, Adviser to the President of the Republic.

Dr Awad Taj El-Din, Advisor to the President of the Republic for Health Affairs and Prevention, said: The Egyptian medical team has shown its value in managing the Crown crisis, and the Egyptian state was the first to intervene quickly on professional grounds in crisis management.

He went on to say: Egypt impressed everyone in managing the Crown crisis, and this because of the early predictions of the crisis.