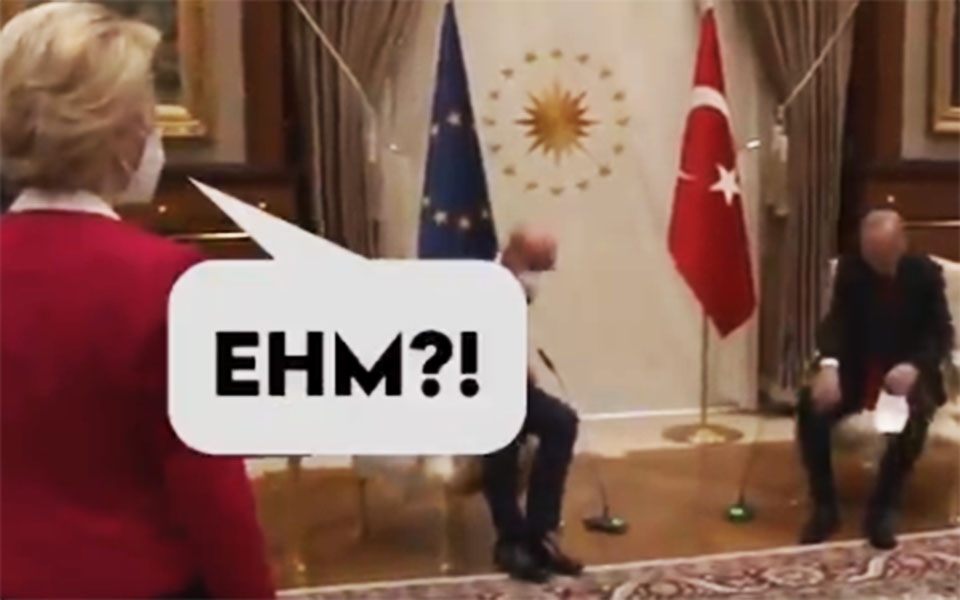 Around the world, he is leading Commission President Ursula von der Leyen standing in front of European Council President Charles Michel and Turkish President Tayyip Erdogan, as there was no room for her in the conference room. presidential elections.

The embarrassing moment that took place yesterday, during the visit of the European leaders in Ankara, caused – according to the Washington Post – diplomatic unrest.

“Ehm” is the new term for “not so should be the EU-Turkey relationship”. #GiveHerASeat #ME #Turkey # women’s rights pic.twitter.com/vGVFutDu0S

The video shows Michelle and Erdogan sitting in both armchairs, while von der Layen sits upright and embarrassed, looks at them and doesn’t know where to sit. “Ehm” is heard in the video until the solution is found and he sits on a couch, about 12 meters away and in front of the Turkish Foreign Minister, Mevlüt Çavuşoλουlu, who – according to the diplomatic protocol – in the hierarchy.

Dutch MEP Sophie in ‘t Veld noted that in previous Turkish president meetings with European leaders, when they were men, the three leaders were seated in“ equivalent positions ”with chairs next to each other. “It wasn’t accidental, it was intentional,” she wrote on Twitter, while elsewhere she criticized Michelle for not giving up her own position.

Some have even ironically commented that this is the “new” EU-Ankara agreement on women’s rights in Turkey. However, Erdogan’s supporters said the incident did not show that women’s status and rights were being degraded.

For his part, the president of the Commission made no statement on the incident, but expressed concern about the history of women’s rights in Turkey.

“I am very concerned that Turkey has withdrawn from the Istanbul Convention,” he told reporters, adding that “this is about protecting women and protecting children from violence. And that’s clear the wrong message at the moment. “

He noted that the two Europeans’ visit to Ankara came two weeks after Erdogan withdrew Turkey from the international treaty aimed at preventing violence against women, known as the Istanbul Convention.