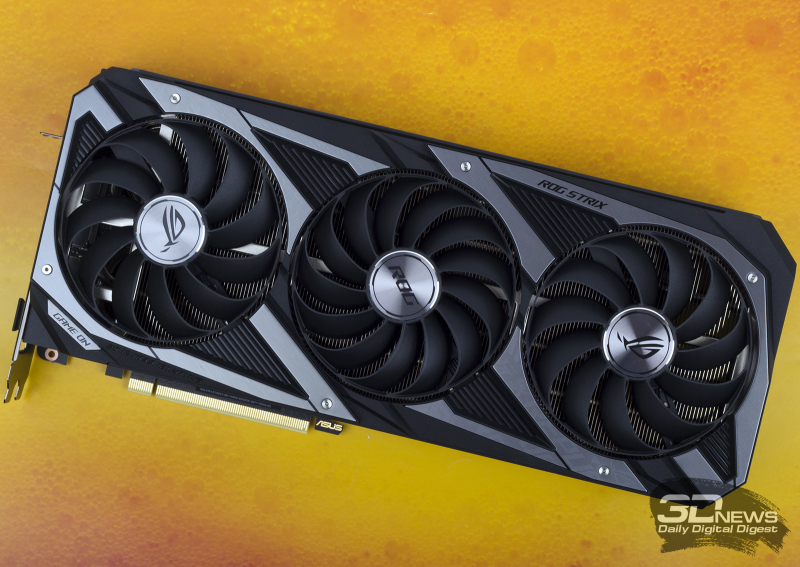 As it should be, the next version of the ROG STRIX has received remarkable factory overclocking. In Boost mode, the GPU frequency of the ASUS model is 1845 MHz, which is 75 MHz higher than the reference one. The rest of the features of the ROG STRIX GeForce RTX 3070 Ti OC are shown in the table below.

If you missed the articles “NVIDIA GeForce RTX 3080 video card review, part 1” and “NVIDIA GeForce RTX 3070 Ti video card review: a timeless product”, then I strongly recommend keeping up. In the first part, you become familiar with the architectural features of the Ampere accelerators, of which there are many. The second part examines the performance of the new NVIDIA product compared to the performance of a large number of other graphics accelerators. 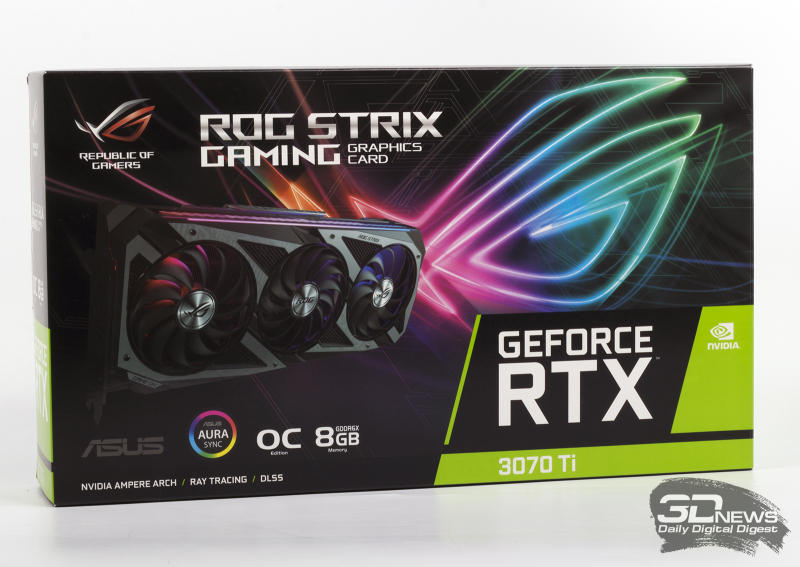 As I said, the GeForce RTX 3070 Ti sold out at the same time that prices for video cards started to fall. The cost of most gaming accelerators in July still can’t be called adequate, but the fact of the fall can’t help but be gratifying. So, at the time of this writing, ASUS ROG STRIX GeForce RTX 3070 Ti OC can be purchased in Moscow stores for an average of 120,000 rubles, although some Internet sites have sold the novelty for 115,000 rubles. One hundred and twenty thousand is a lot, but I sincerely hope that by the time this material is published on the site, prices for video cards will drop further.

The device comes in a beautiful cardboard box. True, I didn’t find anything particularly noticeable inside, other than the accelerator itself. 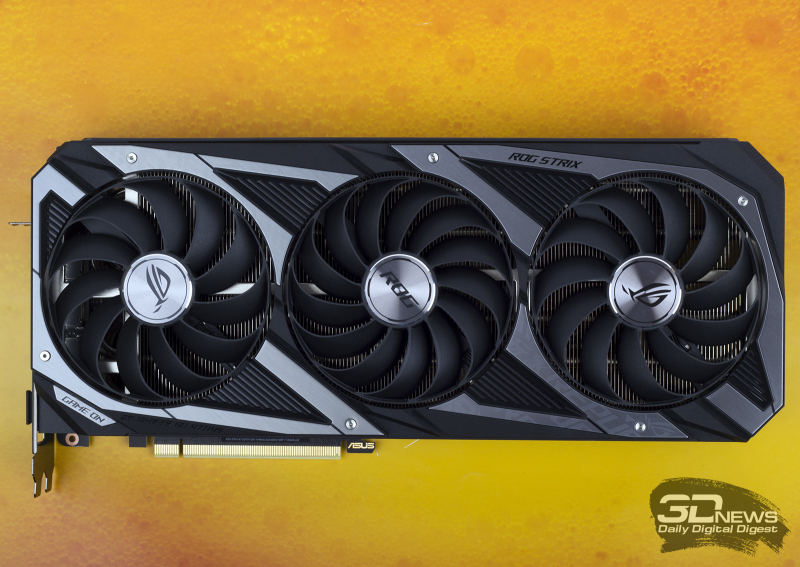 All ROG STRIX adapters for GeForce RTX 30 series graphics cards receive a powerful 3-fan cooler. The photographs clearly show that the length of the heatsink remarkably exceeds the length of the printed circuit board. The device as a whole turned out to be long – 32 cm, but most of the cases ROG STRIX GeForce RTX 3070 Ti OC Midi-Tower will fit without problems. It is important that when installing this accelerator, you lose two motherboard expansion slots soldered below.

The “GEFORCE RTX” signal actually serves as a screen type, covering the RGB wire-backlight of the video card. By the way, the whole side is highlighted – as shown in the video below. RGB tape adaptation is done in the Armory Crate app. 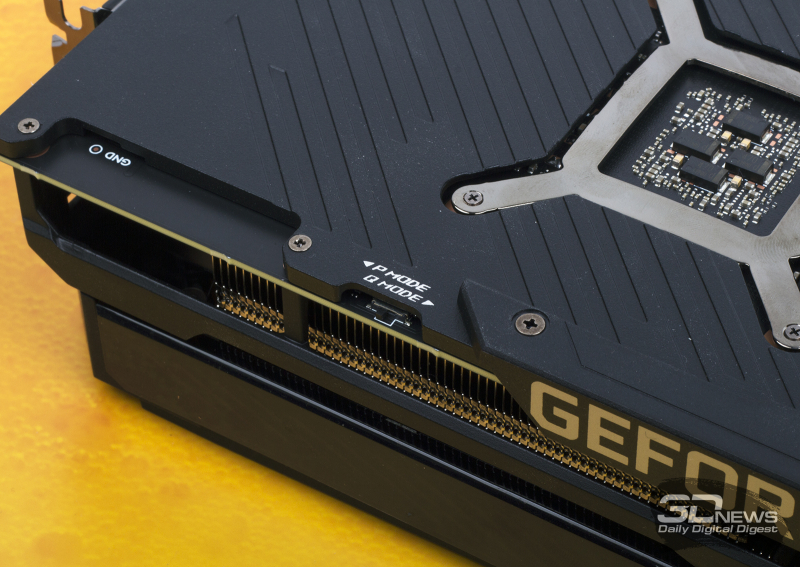 In addition to the colorful backlighting, on the side of the ROG STRIX GeForce RTX 3070 Ti OC there is an analog switch for the video card operating modes. I will talk about it in more detail in the second part of the article. 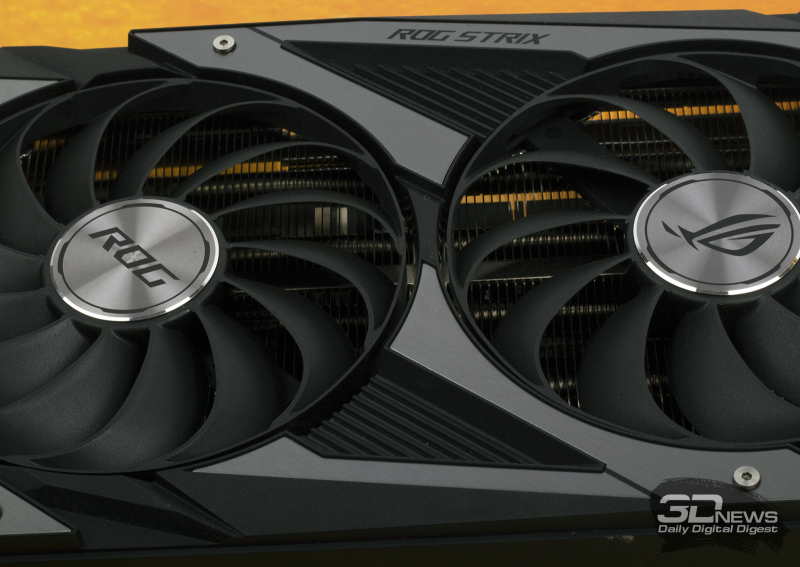 It is also noteworthy that all three fans have a special blade shape and a closed ring at the ends. The side-mounted fan rims have cuts to help diffuse air flow over a larger area of ​​the radiator. They have also been used in previous series of ASUS video cards. According to the manufacturer, this form of “Carlsons” allows you to increase airflow and reduce noise at high speeds. It also remarkably increases the rigidity of the plastic blades. 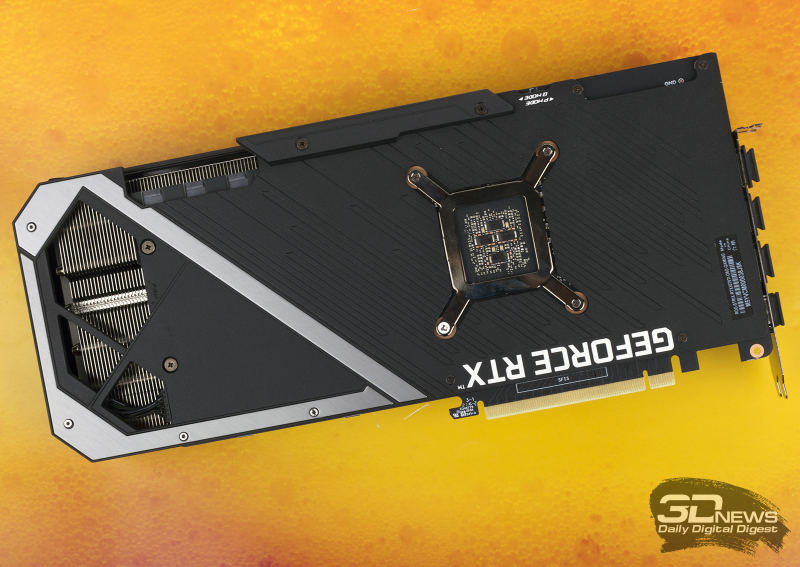 The back plate, made of metal, not only increases the rigidity of the structure, but is also part of the cooling system. First, it comes in contact with the memory chips (from the side of the contact pins) and the elements of the VRM area through thermal spacers. Second, at the back, the plate has several large holes – they are made so that air blown by the third fan can pass through it.

Here, on the back of the video card, there are two 4-pin connectors for connecting the fans. Already noted that it is possible to connect to these connectors, for example, housing impellers mounted on the front panel. This will increase the number of such useful connectors in the system, and the very rotational speed of the “Carlsons” box can be tied to the video card temperature indicators, which is convenient. 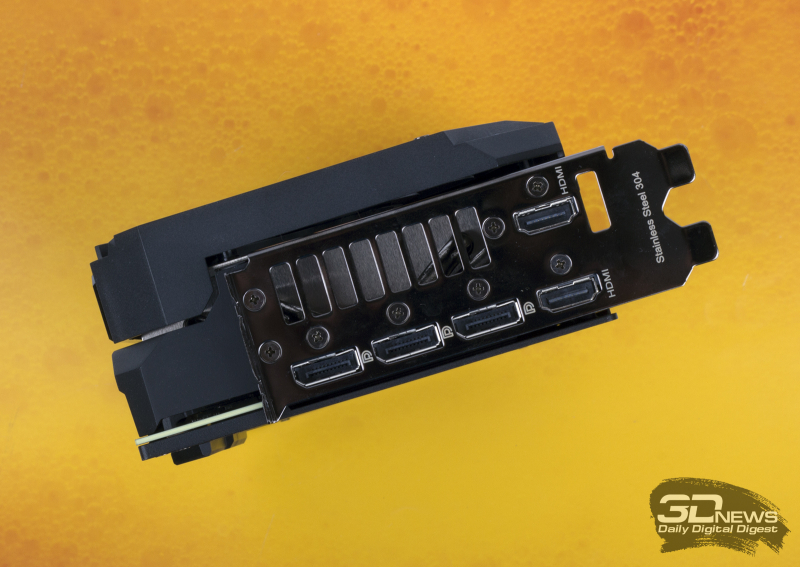 On the I / O panel, there was room for three DisplayPorts and two HDMI ports at once. The grate from which the heated air is blown is small, but with such a cooler design, this should not be a problem. 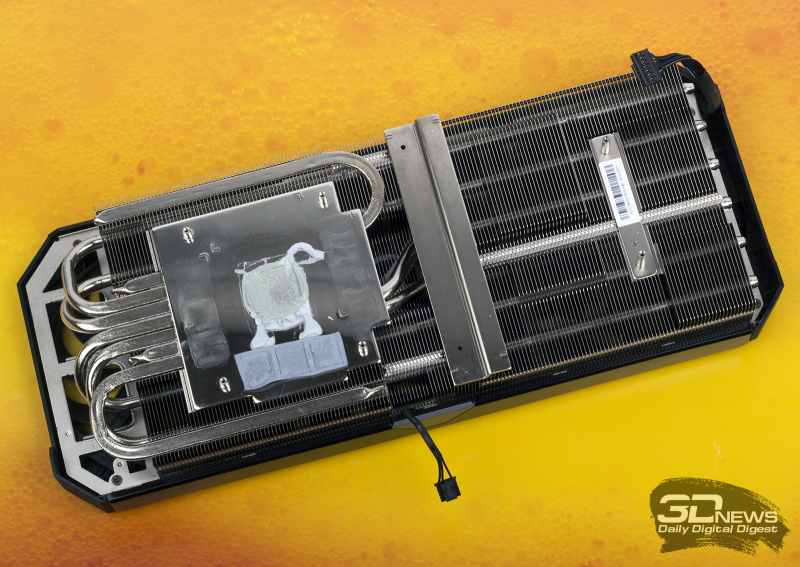 The video card is pretty easy to disassemble, but for this you need a Torx screwdriver. The main part of the cooler is a giant single-section radiator with seven heat pipes of different lengths and shapes. The manufacturer claims that the area of ​​aluminum fins has increased by 31% – in fact, therefore, the video card takes 2.9 expansion slots, and not 2.7 as before. Copper tubes pass through a large sole, which, as you can see in the photo, is in contact not only with the GPU, but also with the memory chips. It may also appear that U-shaped extreme heat pipes are quite necessary to cool GDDR6X memory. The radiator also removes heat from the elements of the energy subsystem.

In addition to the back plate, the PCB is equipped with a metal frame to prevent the graphics card from overturning. Its second task is to also cool the soldered power converter elements on the left side of the GPU.

Unlike the ROG STRIX GeForce RTX 3070 OC, the Ti version received three 8-pin power connectors at once. In this regard, the ASUS novelty printed circuit board is more reminiscent of the GeForce RTX 3080 PCB. The connectors, by the way, are equipped with a light indication. If the red light comes on, it means that there are voltage dips along the 12 V line in the power supply. As usual, the mounting of the video card is done without human intervention.

The ROG STRIX GeForce RTX 3070 Ti OC power subsystem has 16 phases, with 13 channels running the GPU, and the remaining three are memory. In the first case, the phases are controlled by two 10-channel Monolithic Power Systems MP2888A PWM controllers, in the second – by one uP Semiconductor uP9529Q. For comparison: the VRM of the GeForce RTX 3070 Ti reference version operates in a 9 + 3 scheme.

Eight Micron OXT77 D8BWW memory chips are soldered next to the GA104 processor. One of the important features of the GeForce RTX 3070 Ti is precisely the use of GDDR6X chips.

If you notice an error, select it with the mouse and press CTRL + ENTER.

Shakhtar players said they are more technical and faster, but I didn’t see that ᐉ UA-Football

The Chinese Jingjia Micro has a GPU with GeForce GTX 1080 performance / News / Overclockers.ua

The head of parliament said how he feels

Galkin and Pugacheva’s daughter appeared in a white dress with a leather jacket. Video