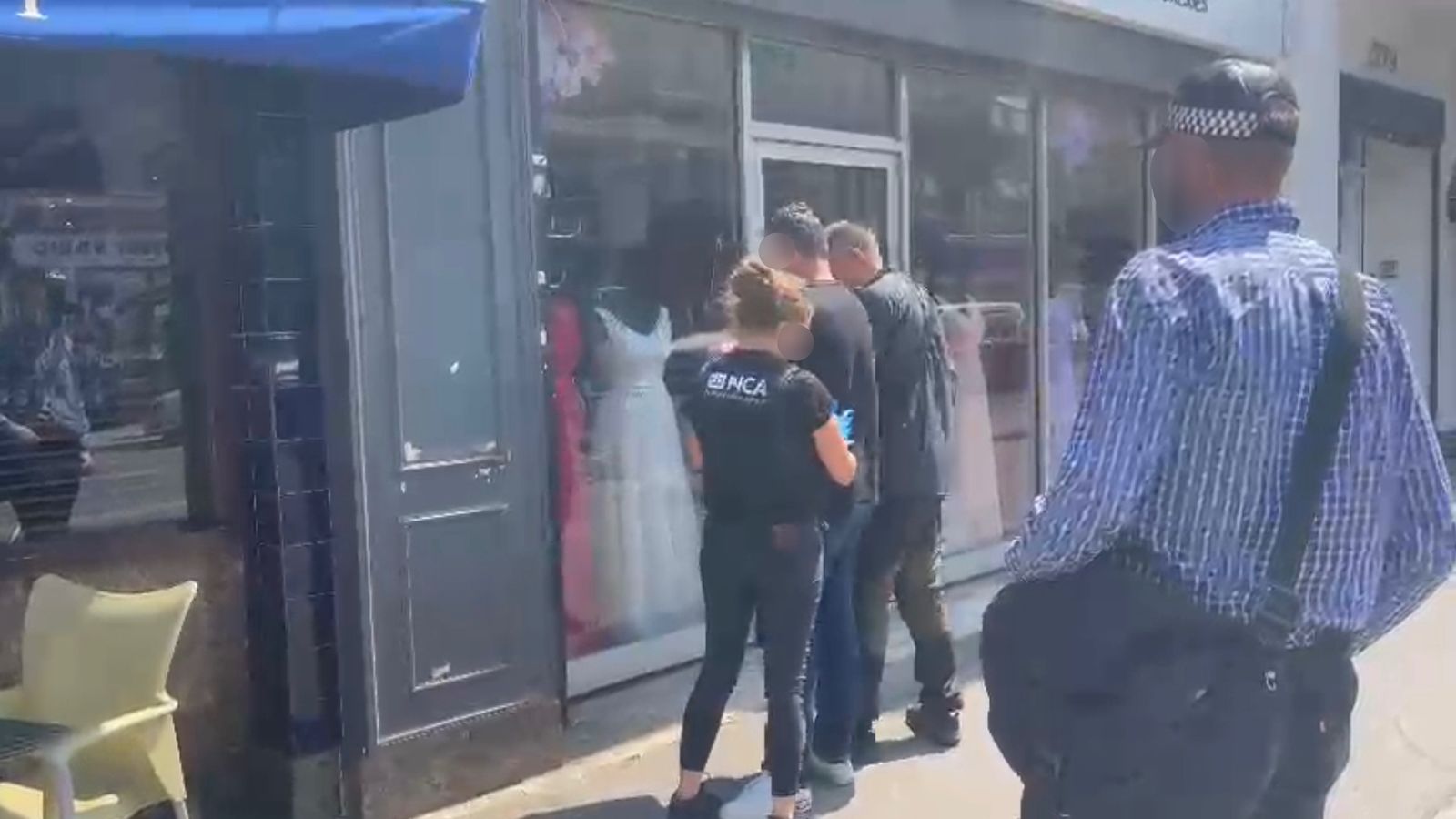 Investigators have arrested alleged leaders of an Albanian group believed to have brought in hundreds of illegal immigrants into the UK.

The main target, with jeans and a shirt, was held while enjoying a beer with three friends outside a smart tapas restaurant near Croydon city center in south London.

Two National Crime Agency officers jumped over and threw the 40-year-old man against his chair before handcuffing him and placing him in a police van.

The restaurant has been ordered shut down – and the shady figures of a search team could later be checked by blinds seeking cash and other evidence of money laundering.

The 36-year-old second suspect had the front door open on his half-painted home back from Brighton Highway in nearby Purley.

His grit drive was suddenly filled with NCA and Metropolitan Police vehicles, including a forensic van.

Shortly after their arrival a woman ended up with a small child in a pushchair. There was a look of thunder on her face.

It is unclear how much she was told, but they brought her and the boy inside the house before the suspect was taken by hand.

A 26-year-old woman was later arrested at the same address.

Four other men, aged 26 to 44, have been arrested in further raids in south London, Surrey and Oxfordshire.

It is believed that the suspects set up vans and trucks to bring in hundreds of illegal immigrants – mainly Albanians – from France via the Channel Tunnel in the UK.

They allegedly run a bespoke service, charging migrants up to £ 25,000 each, with links in France, Germany, the Netherlands and Poland.

NCA branch commander Richard Harrison said: “We believe the arrests will significantly disrupt an organized criminal network responsible for the potential smuggling of potentially hundreds of people in the UK illegally.

“The network claimed to provide a high-level service and charge accordingly, using complicit drivers to transport migrants in rented vehicles.

The NCA said it had identified bank accounts, some of which had hundreds of thousands of pounds, which are believed to be controlled by the gang.

The agency’s deputy director, Andrea Wilson, said: “This operation shows that people smugglers are at the top of the NCA’s list of targets.

“It is a form of crime to see people exploited for profit by criminals who have no regard for human life.

“Those involved in organized immigration crime should know that our officers are working day and night with partners in the UK and abroad to find, disrupt and dismantle their business models and bring them to the forefront. justice.

“Today I also have a message for drivers, commercial or otherwise, who consider helping these organized criminal networks by transporting migrants on their behalf.

“Don’t do that. The penalties for those caught are severe and life-changing. It’s just not worth the risk.”

Seven suspects are being questioned on suspicion of crimes including smuggling and money laundering.