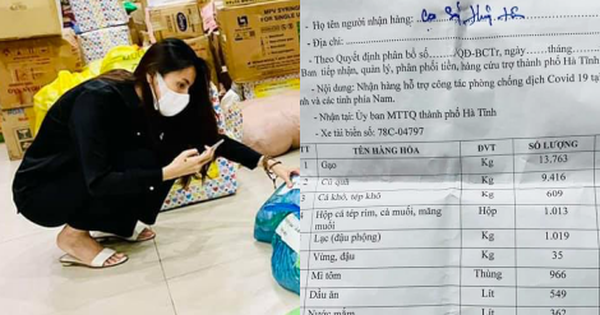 In the midst of the complicated Covid-19 epidemic, the spirit of solidarity and mutual affection of the Vietnamese people was strongly promoted. People everywhere together have contributed food, vegetables, necessities, .., to support those in need in Ho Chi Minh City to overcome the pandemic. Standing up to receive food containers from Ha Tinh to Saigon to distribute to people, Thuy Tien and Cong Vinh recently got into a controversy over online forums.

The reason comes from sharing photos of Thuy Tien taken with the gift car to thank the authorities and Ha Tinh’s relatives for their beautiful actions. However, some people in the network suddenly looked at what Thuy Tien said “Thank you Thanh Doan – Ho Chi Minh City Youth Union for supporting the store staff so that Tien and FC can distribute conveniently to people in need “, accusing her of” receiving “.

The highlight of the “war of words” was that a netizen who claimed to be from Ha Tinh left a long comment expressing an urgent attitude, accusing the couple Thuy Tien and Cong Vinh of “receiving” gifts from others to fight. 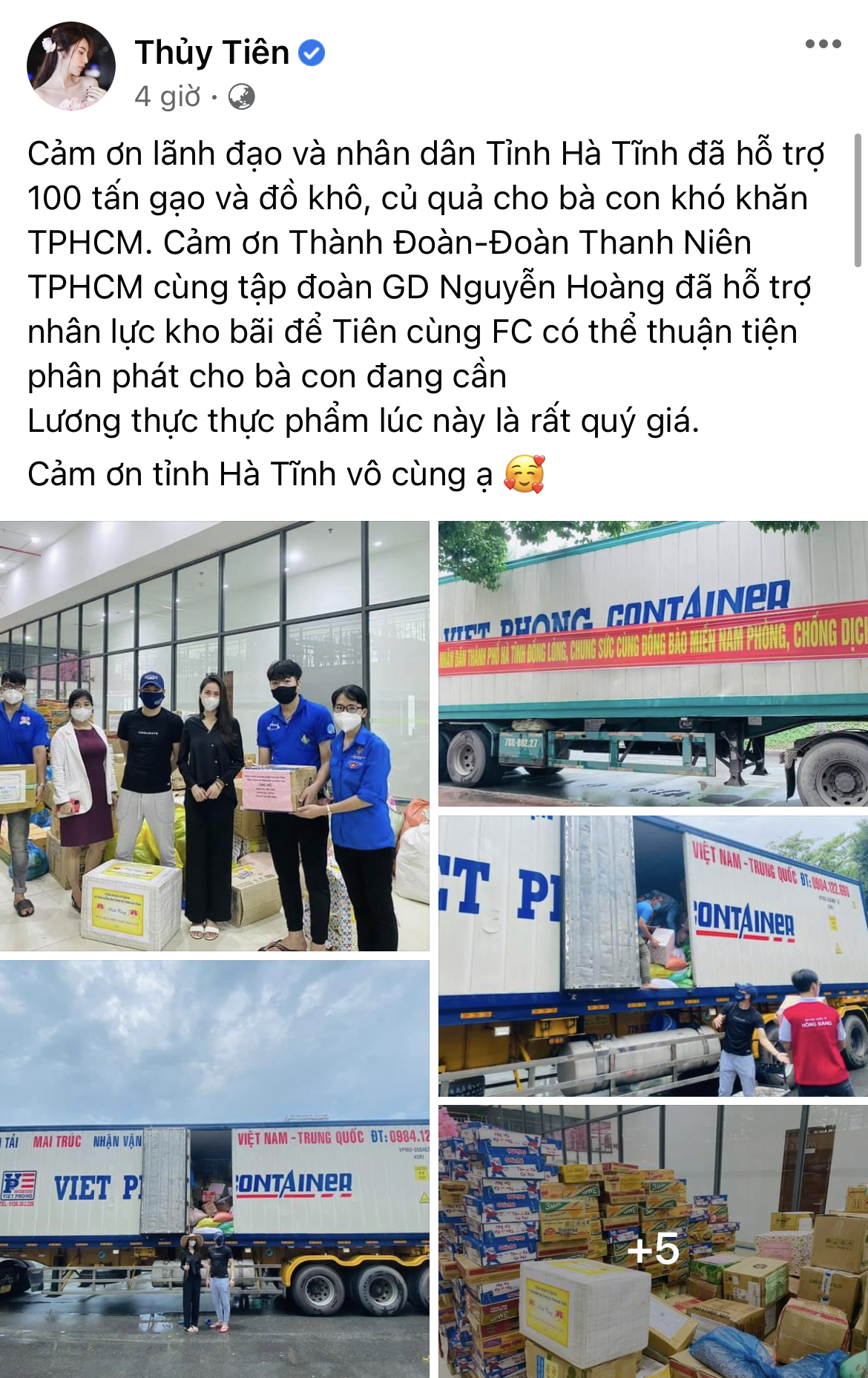 Thuy Tien has received gifts from sponsors and relatives in Ha Tinh, but her status is misleading 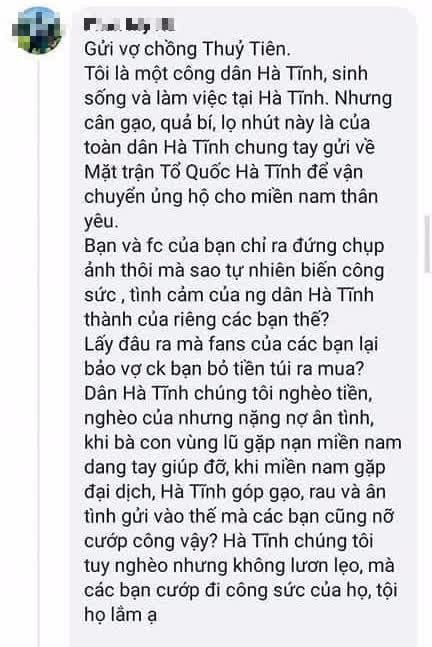 One person expressed anger, accusing Thuy Tien of “receiving a woman” and competing for people’s contributions in Ha Tinh

Before the frustrations of the netizens, Cong Vinh spoke officially and explained directly to the antifan: “This is a gift from the people of Ha Tinh through the Ha Tinh Homeland Front. How can I give my energy to the “Have you seen any brothers who accept work on behalf of relatives? I have read everything that Tien wrote. I don’t think you care about that either. It’s a fact that from morning until now, he and everyone have been working. to convey the gifts that the people of Ha Tinh send to the people. ” 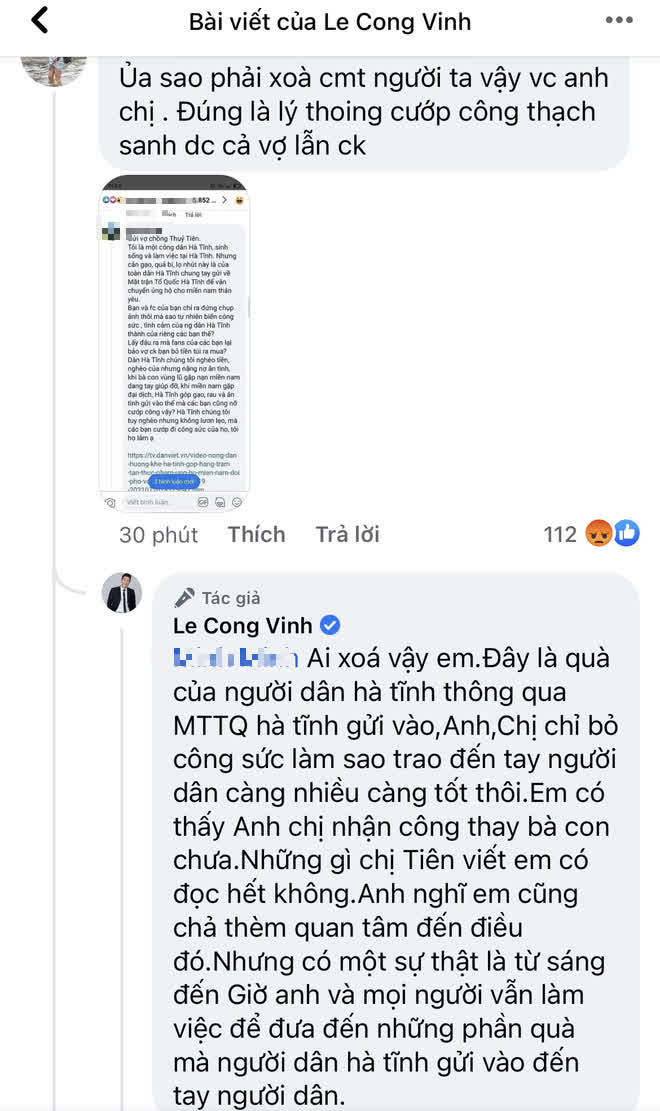 Cong Vinh claimed that he and his wife never intended to compete, he and Thuy Tien only made an effort to distribute gifts to relatives. 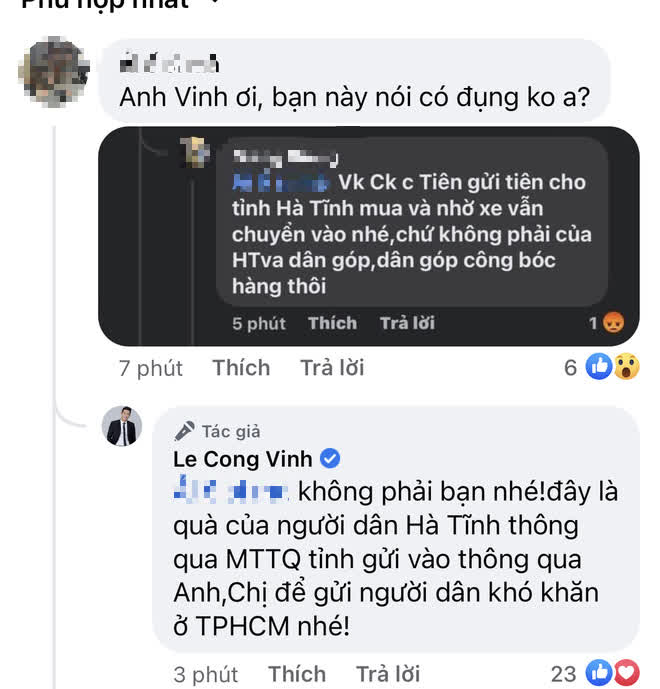 Cong Vinh also denied spreading false information that he and his wife were the ones buying these gifts.

Not only Cong Vinh, Thuy Tien also explained more: “I have clearly stated on the merchandise that this lot is the food of Ha Tinh people given to support the people of Ho Chi Town Minh. We just delivered and the supporters help to distribute the goods to people who need help, not buy it from me. “

In the status shared on her personal Facebook, the female singer A white snow dream he also wrote clearly: “Thank you to the leaders and people of Ha Tinh for supporting 100 tons of rice and dry goods and vegetables for the needy in Ho Chi Minh City. she is very precious at this time. Thanks to Ha province. very quiet “, she did not admit that it was her husband’s contribution as the accused netizen.

Not only Cong Vinh, Thuy Tien stressed again that this is food and food contributed by Ha Tinh people

To show transparency, Thuy Tien also sent a receipt for receiving tens of tons of food from Ha Tinh people. At the same time, on every gift sent, there was no name Cong Vinh or Thuy Tien, but it was generally recorded as: “The Trade Union of the People’s Court of Ha Tinh province respects the dear compatriots of the South “. 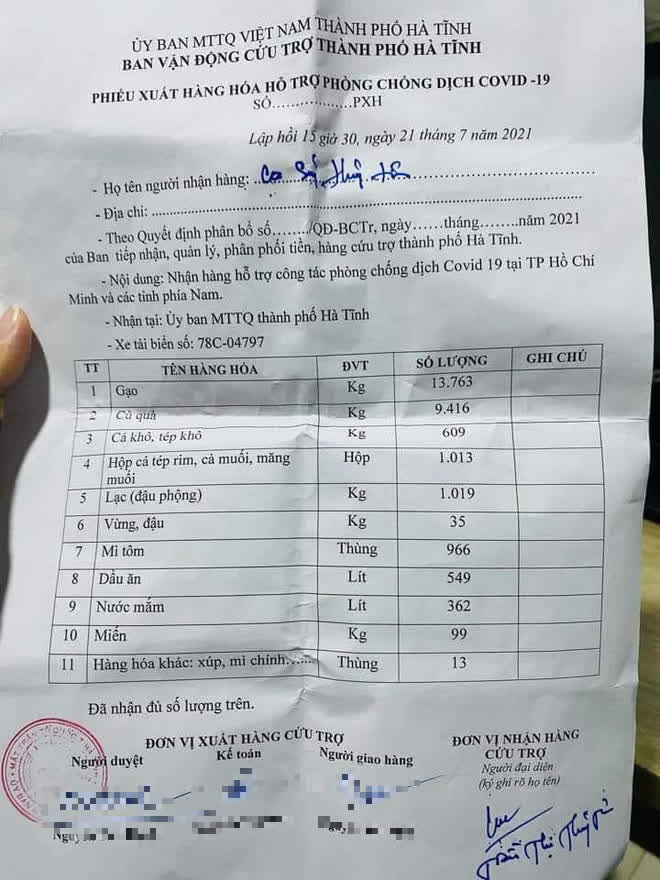 Thuy Tien also advertises the receipt of items, the female singer’s side is just “The unit receiving help items”. 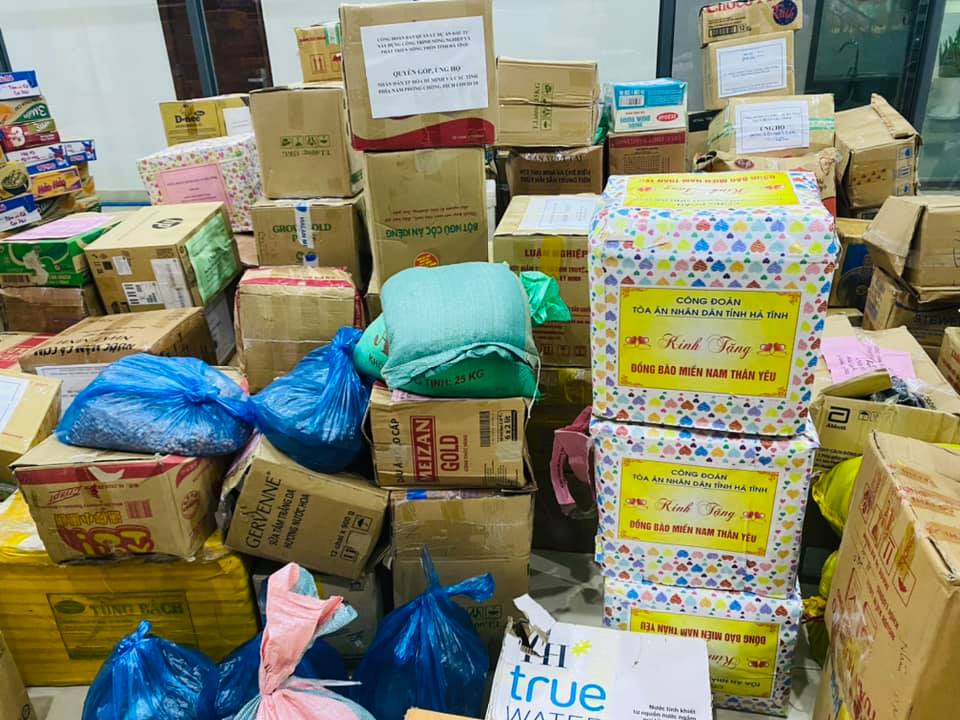 On every gift, there is no name Thuy Tien or Cong Vinh as netizens denounced 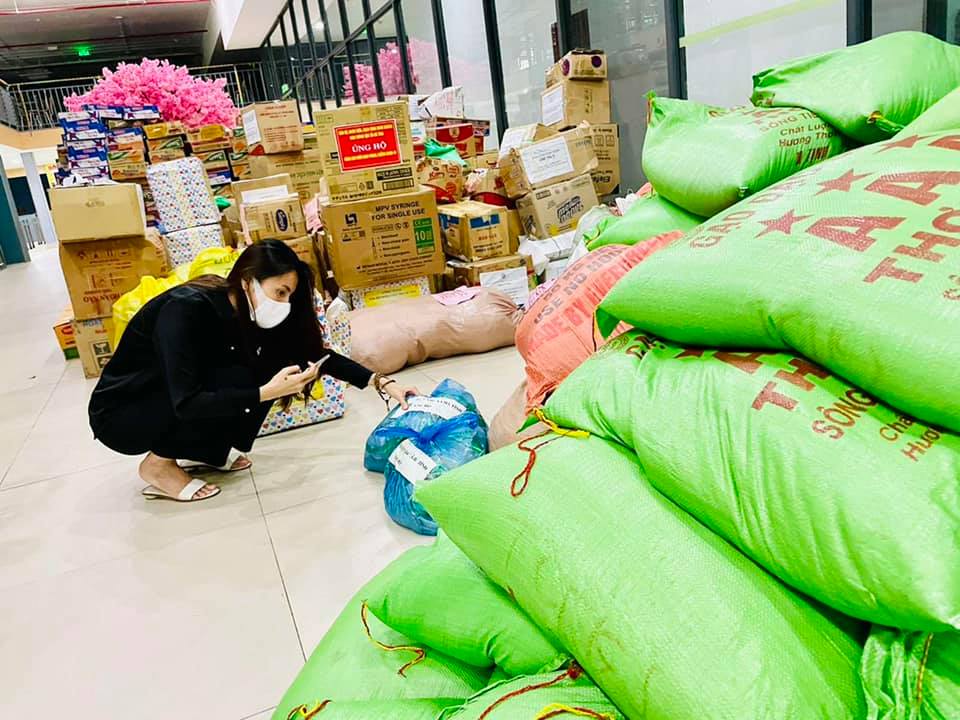 In this charity case, Thuy Tien only has the role of receiving items and giving them in difficult situations.

It is known that the people in Ha Tinh gave thousands of tons of food, vegetables, necessities, …. to share some of the difficulties with people in Ho Chi Minh City amid the complicated epidemic. On the evening of 22 July, 11 container trucks carrying a total of around 1,000 tonnes of cargo were dispatched to the south, Thuy Tien – Cong Vinh’s representative distribution truck was one of them . 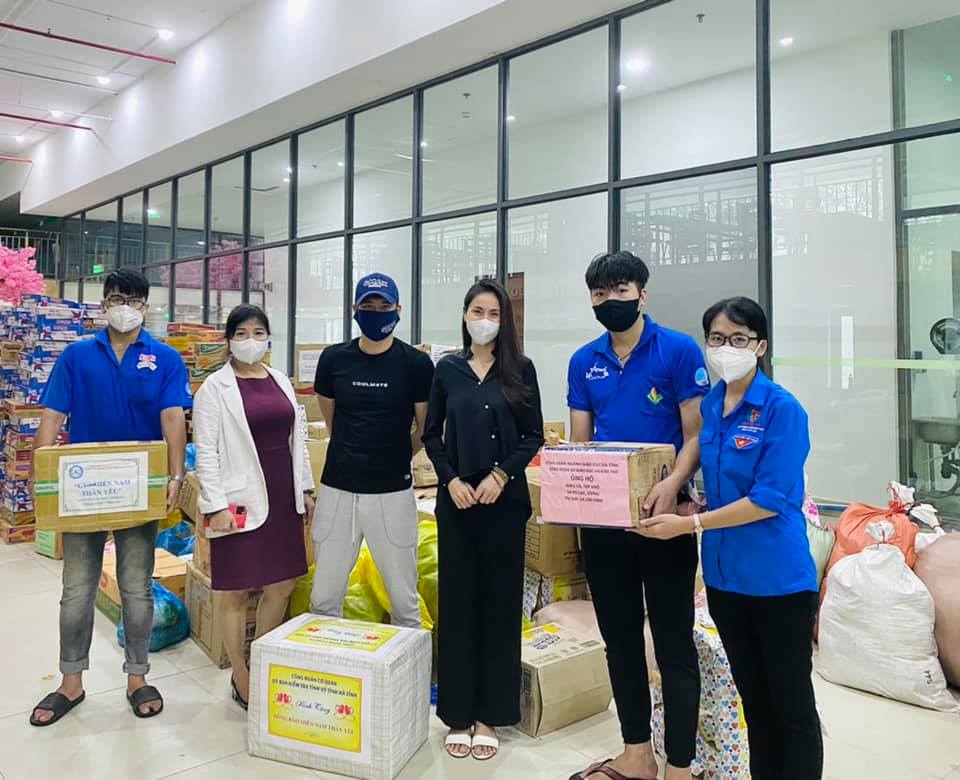 Many people were annoyed because part of the netizens did not study the information carefully, but deliberately deduced negatively to “attack” Thuy Tien and Cong Vinh

District 7 is open after a series of closed days, the owner of the noodle shop is tired of eating meat

How did Medvedev defeat Djokovic?

Defense Minister Kishi: Japan is in the same boat as Vietnam

Dat G and Cindy Lu are suspicious after 4 months of public dating, the man left the association “just behind me”?